“Laws That Protect Your Rights” with Peggy Hall

In a recent live broadcast, Peggy at TheHealthyAmerican.org shared a ton of excellent information on our civil rights and legal rights.

Especially at a time when we are being subjected to health “orders” that have absolutely no law or authority backing them up, it is important that we all understand our rights and what the law actually states.

Learn why these health “orders” are not lawful.

Below is a transcription of Peggy’s broadcast. I recommend watching the broadcast above as well above.

Well, as it turns out, no one has that authority.

The Constitution doesn’t give you rights. You are born with God-given inherent rights. In some writings, it’s called your natural rights or birthright.

A right is something that cannot be taken from you.

You have the right to life. Life requires oxygen. Therefore, no law that requires you to restrict your oxygen is lawful.

Now they may have written it up and even passed it by your country government. But they are not lawful, so how can you fight it? That’s what we’re going to talk about.

That contract doesn’t give us rights. That contract limits, defines and protects the government from taking those God-given rights from us. The Constitution protects our rights.

We have Constitutionally-guaranteed rights. We have rights that may not be taken from us without due process of law.

Nothing can be taken from you without due process of law.

Due process of law means that you have had your charges explained to you, you’ve had a chance to face your accusers, you had a jury trial, and you can appeal that decision if you don’t agree with it.

So that (the Judicial branch) is one of the branches of government.

There are three co-equal branches of government.

The Constitutional contract between “we the people” and the government describes and defines our limited form of governance, how they can control us.

That’s why we need limits on what the government can do. That’s where the Constitution comes into play.

The Legislative branch of government is the law making body in the United States. And that is our Congress and Senate. And in your state, you also have a State Senate and Assembly. Most of the states have a legislative body made up of two bodies: the Lower House (aka Assembly) and the Upper House (aka Senate).

There, an idea is introduced into the two houses in the form of a bill. And the bill describes the proposed law. And the bill goes to a committee and they debate on it. And “We the People” get to give our input into it.

Those bills must be published so that we can see what’s going on.

The Lower House can pass a bill for a proposed law. Then it has to go to the Senate. Then it goes to the Givernor who can approve, veto or delay the bill from becoming law.

The Legislative body can override a veto with 2/3 vote of the legislature.

We have a legislative body in the federal government and in each state.

Each state makes its own laws regarding education, driving, professional licensing and so many things belong to the states.

The only thing the Federal Government has to do with you is that they take your money in the form of federal taxes, they provide for defense, they create transportation and they have a few other constitutional activities. But most of what they’re doing is a complete coloring outside of the lines.

There was nothing in the Constitution to create a U.S. Department of Education or Homeland Security.

We have the Judiciary branch which is the courts, the judges, the law enforcement, the sheriffs, prisons, jails, corrections. California has the largest prison system in the United States.

The Constitution is the supreme law of the land. No laws are valid that violate our constitutional protections. Period.

There is no clause in the U.S. Constitution that says, “except for a pandemic”. This is exactly why the Constitution exists – it is for times like this so we are protected from the lawmakers (lawbreakers) trampling on our rights.

The Executive branch of government is your mayor, your governor or the President.

A State law is a statute.

The U.S. Bill of Rights

The Constitution does not delineate all our rights, so there was a second document created called a Bill of Rights. And the Bill of Rights are the Constitutional amendments. These are some of our most important rights. The Founding Fathers of the United States realized that they needed to write these rights down so that the government they were creating did not trample on these rights.

None of those laws are valid if they tell you, “this is how much you’re allowed to earn”, “this is when you can stay open”, “how many people you can have inside”. That is stealing your property without due process of law.

A law is not valid if it violates our rights.

These laws below were passed in 1964 to amplify the rights we were each born with, saying that we are all born equal. A business cannot discriminate against someone else because of the color of their skin, age, gender, ethnicity, medical condition or religion. Print out this card here.

These laws protect you to be served by a business without discrimination: 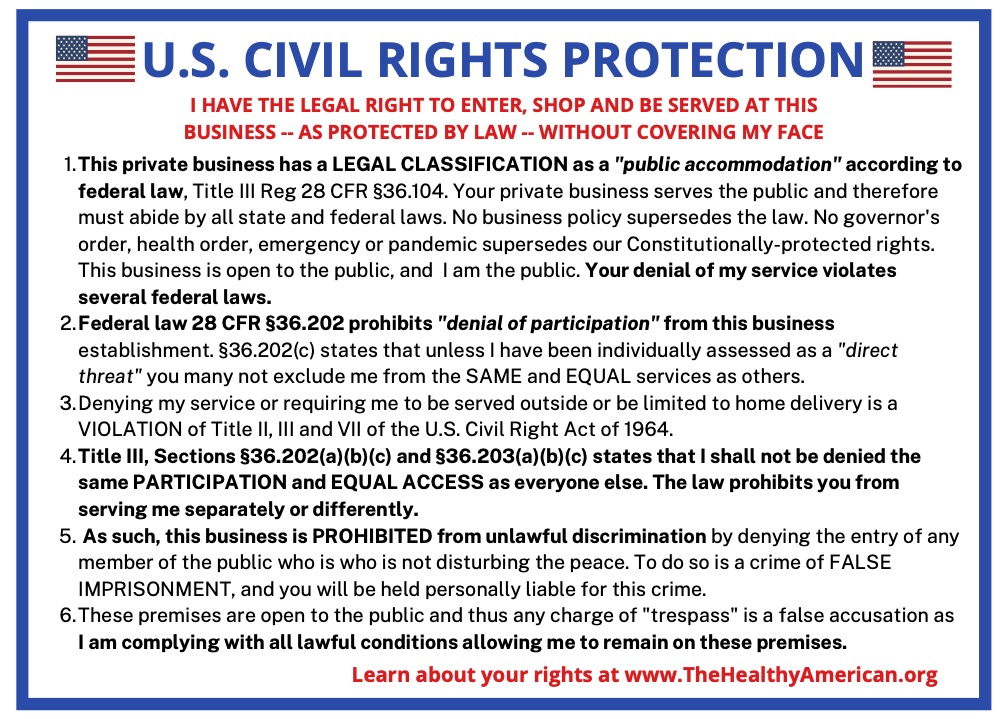 There is another law that says that you are not a direct threat to any of these businesses just because you have a bare face.

We need to educate law enforcement and these businesses, schools, medical facilities, employers, transportation and others on all of this.

No one can say that you are a threat to their business just because you don’t have your face covered. That would be like you entering into a store and every patron being handcuffed and the store owner says, “well, we decided to handcuff everybody because you might shoplift.”

This is not legal.

There is no law that requires a person to wear a mask.

And you cannot require anyone to wear a mask. You do not have the power or authority over another person to tell them to wear a mask, which covers their only two air passages for breathing. It is illegal to force someone to obstruct their breathing. That is a type of attempted suffocation, and it is illegal conduct, because it harms another person.

The State of Emergency in California is Invalid and Unlawful.

These health orders they are trying to tell you are laws are unlawful. If it was a law, it would have a code of law attached to it.

Everything other than transportation, commerce, defense, and a way of raising money for the federal government – aside from those things, everything else is left to the states. So your own state is sovereign.

So, the President’s range of authority is very limited.

But the Federal Department of Education has no authority in your state unless the state offers for that help to come in. And why do they do it? Money!

I’m not going to call it a bribe but that’s what comes to mind. So the Federal Government says, “we’ll give you money if you adapt and do what we’re asking you to do”. That’s the only authority they have for that.

There is no authority for a President to tell you what to do – unless you work for the federal government.

You do not need to wear a mask in the post office and they cannot refuse you. It is not required.

Guidelines and guidance are not laws.

The only thing that is a law is a statutory law that was created in your legislative body.

In your state, the governor can and does have the authority to issue an executive order. And that executive order only applies to the executive branch of government. So if you work for a public school, you are affected by that because you’re a state employee.

If you have a professional license that is regulated by the state, you must read the regulations that govern that license. Health orders are not regulations.

Unless you work for the federal government or state government, the executive orders have nothing to do with you.

Have you been discriminated against? Learn how to protect your rights here.

Learn more about the law, your civil rights, and natural rights at TheHealthyAmerican.org. You can also follow Peggy (uncensored) on Telegram App: https://t.me/thehealthyamerican. Print out these cards that document your rights and use these cards to educate people who seek to discriminate against you.