In this video, Ricardo Delgado, founder and director of La Quinta Columna, reveals what he and his research partner, Dr. José Luis Sevillano, discovered after submitting a sealed vial of the Pfizer “vaccine” to a lab for analysis.

“We realized that there was a new phenomenon that for a while we tried to deny, although today it’s evident because of the millions of videos on social media, and we have been able to even measure it with devices: teslameters, magnetometers, etc.

I am referring to the magnetic or pseudo-magnetic phenomenon that people acquire after inoculation.

A magnetic phenomenon on the one hand, but also one that turns inoculated people into superconductors and also stores energy that can be measured with a multimeter in certain parts, such as the forehead, for example.

So from there we started to look for what kind of materials or, better said, nanomaterials can cause those kinds of properties inside the body and we came up with some of the candidates. One of them initially was graphene.

Graphene inside the body acquires magnetic properties and is a superconductor. It serves for energy storage and condensation and was a strong candidate.

Without yet having any knowledge of what was inside the vial, we realized that the industry or rather the stock market of the graphene industry had high uptrend peaks just as the COVID-19 vaccination campaign was starting at the beginning of the year, late December and early January. But also, quite curious, during the flu vaccination campaign.

And, in fact, some scientific papers have already raised the possibility that it could be used as a nanoadjuvant in vaccines. With that hypothesis of suspicion, we did what anyone could have done and what I also recommend that you can do if you have access to a vial.

Graphene Oxide found in the “vaccine”

We had access to a sealed vial from Pfizer, and by means of a request for services to a university, specifically in my name, it was sent for an analysis of the vial, where we were looking for the material in question: graphene.

After some time of investigation by Dr. Pablo Campra Madrid, Doctor in Chemical Sciences, Bachelor in Biological Sciences and member of the University of Almeria, we obtained this preliminary report where we are told that there is indeed solid evidence of graphene oxide in the sample and that it is also the main component of what they wrongly called a vaccine.

From here we began to study the toxicity or cytotoxicity that graphene oxide has on the body.

Pay attention to this finding:

So, from here we started to see what possible compounds, drugs and treatments could degrade graphene oxide.

What can you do if you got the COVID-19 injection?

And look what we found: N-acetylcysteine (NAC) or glutathione administered degrade it. Because what glutathione does is counteract free radicals and oxidants, all the toxins that can enter the body.

And we discovered that there were about 300 clinical studies where certain hospitals and certain universities were using N-acetylcysteine with incredible results.

For example, 100 patients with saturation levels below 50% practically dead —bluntly speaking—, with bilateral pneumonias, within an hour of intravenous glutathione or N-acetylcysteine administration they made it.

They were taken off ventilators and everything. We now fully understand why those treatments worked: because they addressed all the symptoms of the disease supposedly caused by SARS-CoV-2.

Given that to date there is no scientific evidence of an actual sequencing and isolation of SARS-CoV-2, we suspect with many credible indications that COVID-19 disease is actually the side effect of the introduction of graphene oxide into the body by different ways.

And I say ‘different ways’ because, although they were withdrawn at the time, masks containing graphene oxide nanoparticles have been introduced and are still being marketed.

Intranasal vaccines are also prepared, for example, by Turkey. They are made by Nanografi for COVID-19 and influenza.

We know that, naturally, graphene oxide is eliminated by the levels of glutathione in the body, and that is why we suspect that they propose a second, third and even fourth dose every so often: so that you have your considerable dose of graphene oxide.

In short, we are talking about the simultaneous and gradual mass poisoning of the entire world population.

‘In a companion study published in Nanoscale, it was shown that GO is degraded in NETs (aka neutrophil extracellular traps, much like bacteria and other pathogens.’ (NETs are released by neutrophils, the most common type of white blood cell specialized in combating infections.)

Taken together, these studies show that GO can be trapped and degraded in NETs just like pathogens.

I want to tell you that we have published in our website at least 70 studies that reflect everything we are saying and manifesting here.

On the other hand, I have been asked about the efficacy of chlorine dioxide. That goes another way.

What it does is to oxygenate the cell, it prepares it so that it is not easily destroyed by this toxicant.

What glutathione would do is to provide the army with more numbers of soldiers in terms of glutathione to deal with toxins.

What we have found, as I say, is that most of the treatments that have been with N-acetylcysteine or glutathione and even with other antioxidants such as astaxanthin, which is a powerful antioxidant, have been very favorable treatments for the patients.

FDA seeks to ban NAC even though it helps protect against spike proteins in Covid injections? Why?

And also, curiously and suspiciously, found that these health institutions are literally governed by evil; it is a psychopathy without previous history: we had never seen the history of such psychopathy.

By June 17 that the FDA tried to stop the marketing of N-acetylcysteine after it had been used for 57 years as a normal and ordinary mococcolytic. It was a very suspicious thing to do, wasn’t it?

So this is basically my exposition.

Any doubts that you may have about the studies that we have carried out at La Quinta Columna, well, there is simply something that is very conclusive, and that is the preliminary report of a renowned professor of a public university here in Spain.

We are very close to providing complementary evidence to give more strength to this report in which we are already told that there is solid and proven evidence that there is graphene oxide in the sample that we sent.

Simply, for Colonel Tamayo and Judge Giorgianni: regardless of the fact that we obviously think that SARS-CoV-2 is precisely graphene oxide —and we can prove it— or at least it behaves exactly and exhaustively the same, how is it possible that graphene oxide is injected through the vials?

How is it possible if the masks were really withdrawn because they caused pulmonary affections due to toxicity? What are we talking about, gentlemen?

Here I have tried to make the exposition as synthesized as possible so any doubt that may be generated by the manifestation that I have given here can be clarified throughout the time left we have.”—Ricardo Delgado

What can you do to protect yourself before the next “flu” season arrives?

Please see Part 2 here to learn more about the Graphene Oxide and 5G connection. For a recommended nutrition protocol for people who received the “Covid” injection, see Part 3. 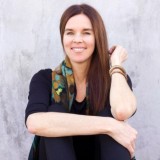 Katrina studied Ayurveda at California College of Ayurveda. She believes that our body is naturally designed to restore itself to balance when we nourish it with a whole foods/real food diet and live holistically in alignment with nature's rhythms.

Through her podcast, Katrina seeks to share the ancient wisdom of Ayurveda, as well as the healing benefits of detoxing/fasting, to empower listeners to take health back into their own hands. May we all live a healthier, happier life!

Previous Post: « Climate Change Is A Hoax. There Is No Water Shortage.
Next Post: The Graphene Oxide & 5G Connection (Part 2) »