What You Need To Know About Geo-Engineering, Weather Manipulation & Mind Control (and how to protect your health)

“A weather satellite … will permit man to determine the world’s cloud layer and ultimately to control the weather; and he who controls the weather will control the world” – Vice President Lyndon Johnson at Southwest Texas State University (1962)

A few weeks ago, I came across photos shared on social media of a sun halo showing up where I live in Mexico. People who shared the photos mentioned the “heavy spraying” of chem trails in our sky in previous weeks and attributed the chemicals as being the cause of the sun halo.

Sure enough, when I looked up “sun halo“, I learned that although the sun halo can sometimes be a natural phenomenon, it can also be manufactured with chemicals.

I started paying more attention to the clouds above and one evening I saw first-hand what looked like the after-effects of HAARP or chem trails or both in the sky above me.

Here are photos I took of the sky from my rooftop that evening. You can see what looks like microwave “waves” in the sky. These “clouds” are certainly not natural. 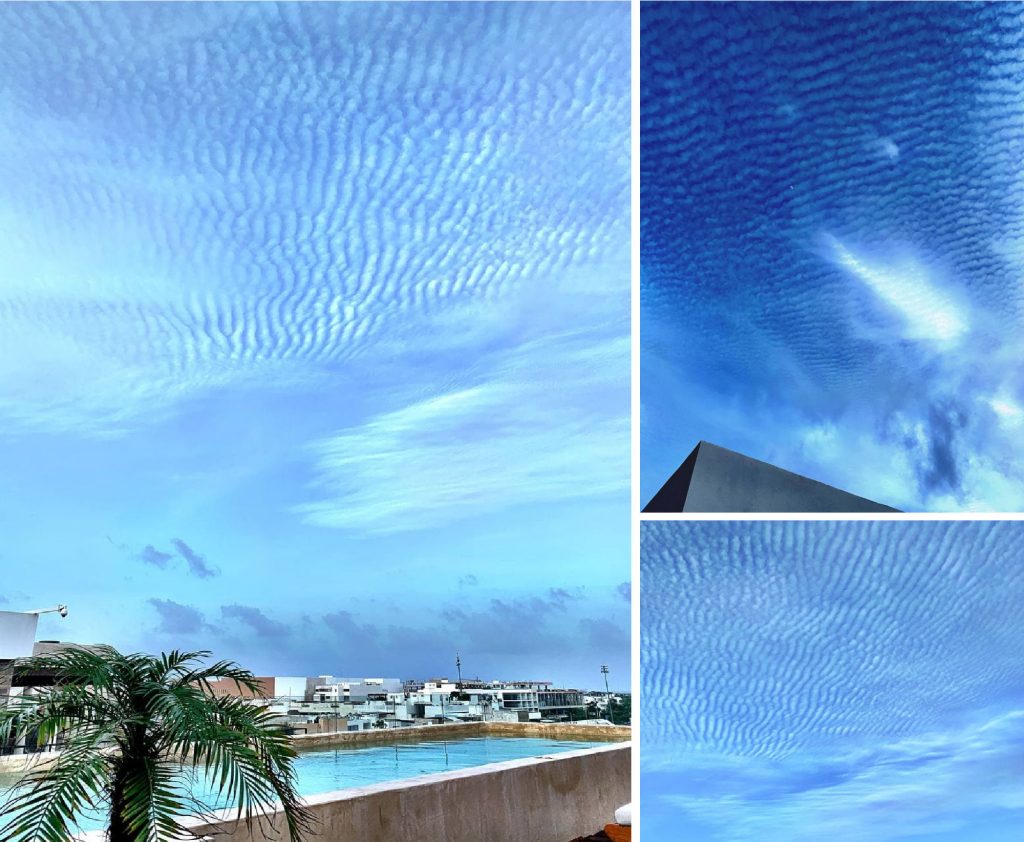 What is causing this wave-like pattern in the sky? Could it be HAARP?

H.A.A.R.P. (the High Frequency Active Auroral Research Program) is an ionospheric research program jointly funded by the U.S. Air Force, the U.S. Navy, the University of Alaska Fairbanks, and the Defense Advanced Research Projects Agency (DARPA). It was designed and built by BAE Advanced Technologies.

There are also other ionosphere research sites around the world, including in Puerto Rico.

HAARP technology is a high-power, high-frequency transmitter. “Officially”, the original purpose of the research program was to analyze the ionosphere which is the top layer of the Earth’s atmosphere.

In addition, the aim was to investigate the potential for developing ionospheric enhancement technology for radio communications and surveillance.

The original research used to develop HAARP technology came from Nikola Tesla. Tesla’s intention was to advance science and technology to free man to pursue more intellectual endeavors. When Tesla died in 1943, the FBI seized his scientific papers and notes. (1)

Years later, inventor and physicist Ben Eastlund had a concept for defense applications for HAARP. Eastlund patented the HAARP technology in 1987 under US Patent 4,686,605 as the “Method and Apparatus for Altering a Region in the Earth’s Atmosphere, Ionosphere, and/or Magnetosphere.” 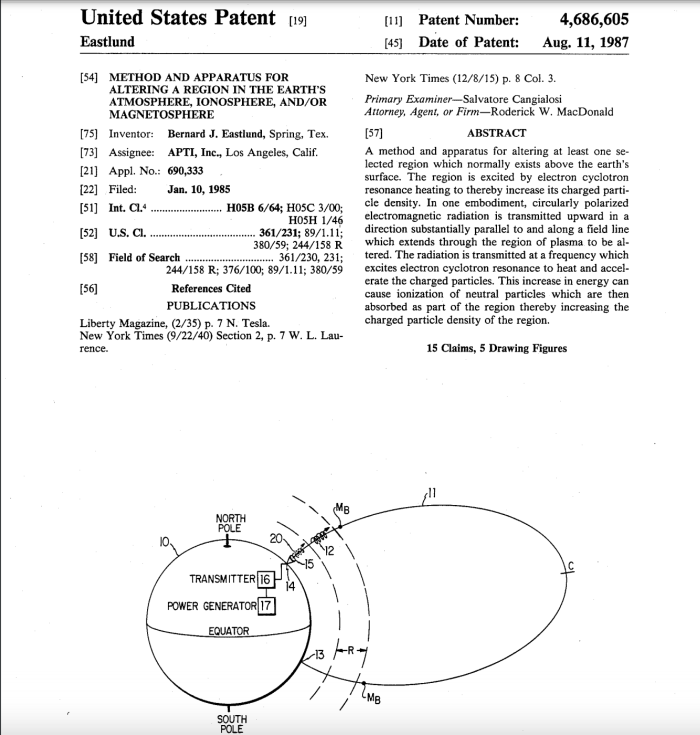 Some of the Planned Uses of This Technology

For military purposes, you can imagine the kind of strategic advantages this would offer.

2. To shield the planet: According to Dr Nick Begich, co-author of Angels Don’t Play This HAARP; Advances in Tesla Technology, the other application they were studying was to create a global shield by popping energy up using naturally-occurring magnetic field lines that surround the earth and spin accelerated electrons around the globe.

With a shield, any intercontinental missiles, asteroids or meteors entering that field would become affected and you’d be able to disrupt them enough to cause them to malfunction.

3. To determine ground structures: Another application was called “over-the-horizon radar.” With this technology, they would take the high frequency energy coming off of HAARP and pulse it or pump it into the ionosphere. Pulsing the ionosphere alters it from DC to AC, creating an actual giant broadcast antenna in the sky. With this technology, you can communicate with submarines and determine ground structures and facilities like tunnels and oil and mineral deposits.

But that’s not all.

Along the way, other disturbing applications emerged.

HAARP can also be used for environmental manipulation and mind control.

The patent states, “Weather modification is possible by, for example, altering upper atmosphere wind patterns or altering solar absorption patterns by constructing one or more plumes of atmospheric particles which will act as a lens or focusing device.”

There is evidence that HAARP was used to destroy a hurricane just before reaching US military bases in Oahu.

And here’s what former U.S. Defense Secretary William Cohen had to say about the technology in 1997:

“Others [terrorists] are engaging even in an eco-type of terrorism whereby they can alter the climate, set off earthquakes, volcanoes remotely through the use of electromagnetic waves … So there are plenty of ingenious minds out there that are at work finding ways in which they can wreak terror upon other nations. It’s real, and that’s the reason why we have to intensify our [counterterrorism] efforts.”

Watch below to hear how HAARP works:

In addition to controlling weather, HAARP technology can also be used to control human emotions, thoughts and behaviors.

Dr Begich reveals, “they discovered Frequency Following Response (FFR) – this is the idea that the brain locks on to an external signal and begins to mirror that signal, consequently your emotional state can be changed. The ELF (Extremely Low Frequency – a kind of electromagnetic radiation) range can be generated (by HAARP) and a response can be created in a large segments of the population.”

“ELF waves produced from HAARP, when targeted on selected areas, can weather-engineer and create mood changes affecting millions of people.”

Watch the video below to hear how HAARP can also influence human brainwaves. (Timestamp: 3:34)

Why are they doing this?!

For now, let’s just remember what Vice President Johnson stated himself, “who controls the weather will control the world.”

In his book, Controlling the Human Mind, Dr Begich shares 250 sources  that trace the issue of mind effects going back to the 1950s.

“Our intelligence groups began to experiment with mind control technologies. The ones that got the most notoriety were MK Ultra programs and 140 sub-programs underneath that.”

“… Chemicals were being used on service men and women and other disenfranchised people, minorities, orphans, prisoners, people who didn’t have strong advocacy. This is in the United States of America.”

This info below shared by Dr Begich is eye-opening.

Sixth Sense: The Next Evolution of Humankind

“At the Mind Effects conference, everyone in the room thought that the next evolution of humankind was the awakening of that sixth sense in all of us. And that is what I believe the military discovered – that we all have this innate, God-given, Creator-given, however you want to look at it, ability, that other systems and belief systems, inhibit.

But consider, transparent government if we all had that capability.

“The thing that came forward in all of this, is that as they looked into what human beings are capable of, this is what scared the hell out of the military. Because everyone in this room has the capability of developing these higher attributes and capabilities. Now can you imagine, a dozen or a million people on this planet – the next evolution of human beings, I believe, is in that direction.”

What Dr Begich is suggesting is that the military and, presumably, those in power, were threatened by what they saw as the next evolution of humankind: the development of higher consciousness.

Over the past decades, human consciousness has been under attack in four primary ways:

Each of these dampen or contribute to shutting down consciousness, as they damage the pineal gland, the small gland in the brain that is considered to be the “seat of the soul”.

Where To Go From Here

Despite all the evidence we can literally see in the sky above, most people have never heard of geo-engineering and are unaware that “sun halos”, “stripes in the sky” and “chembows” are caused by toxic chemicals and aerosols sprayed into the atmosphere.

The most important thing and first step, therefore, is to simply know what geo-engineering is and know that it is happening in every country around the globe.

So, awareness is the first step.

That is the purpose of this introductory post – to raise awareness. We need to be awake and aware that this technology exists. We also need to understand how it impacts us, our weather and our environment.

Here are a handful of actions you can take to protect yourself.

If you made it to the end of this post, high fives and thank you!

With knowledge, we are less likely to be manipulated by the media – especially when they seek to instill fear into our minds about “climate change”.

I encourage you to look into everything I’ve shared above for yourself – especially the connection between climate change and geo-engineering.

In my own research, it’s become evident that unusual changes taking place in the climate – from record-breaking heat waves, devastating fires, hurricanes, earthquakes and tornadoes in unusual locations – are a result of geo-engineering.

This post is the first of many that I will be sharing on geo-engineering, chem trails and harmful frequencies.

In future posts, I’ll be diving deeper into these technologies, as well as sharing additional actions you can take to protect yourself.

To your mental, emotional and physical health,

* Other patents on weather modification

Previous Post: « Fasting for Self-Healing: Water Fasting Is The Fastest Way To Repair Cells
Next Post: Are You Removing Toxic Fluoride From Your Water? »